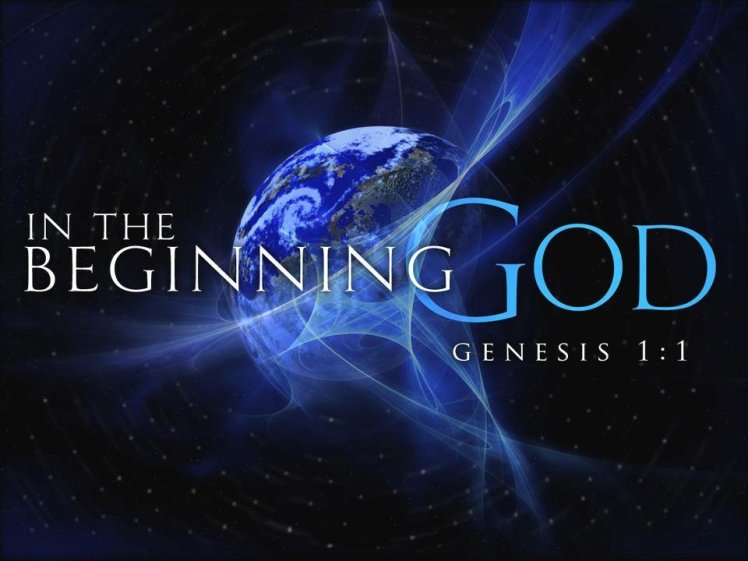 I have been praying to God about what do I blog about this past week. Actually, it has been a constant prayer of mine since September last year. However, I wasn’t getting anything from God as to what to blog about. Yet, through my activities over the past week, I began to pick up on something, or maybe should I call it a “God something.”

The Lord God began impressing on me, “In the beginning God” using different methods of communication. At my local church, we are going through Genesis 1-11 on Wednesday nights specializing in the phrase, “In the beginning God.” This past week, I went to work when I had heard some sermon on Genesis 1:1 where Pastor Irwin Lutzer is the senior pastor at Moody Church in Chicago, Illinois and the mouthpiece for God at Running to Win Ministries. “Interesting,” I thought to myself, ever trying to find God’s will for my life. Then, I began to seriously think about it creating excuses along the way like I am not educated in all the nuances in Creation. However, I finally submitted just like Moses and Gideon. Hopefully, some of you who read this will get something out of this blog like one never thought of it this way before to radically changing your view of Creation.

In the beginning God created the heaven and the earth. (Genesis 1:1; KJV)

Moses, under the inspiration of God, could hardly think of the words he would use making so much controversy when he wrote them. Actually, he wrote them to be a remembrance to and for Israel. Moses didn’t know, at the time until his death, that his words that he used would cause so much controversy among the rest of the world. Moses didn’t know the plan of salvation that God had planned for the world through His Son, Jesus Christ, several thousand years from actually writing these words “In the beginning God.”

He didn’t know the plan of exchanging a perfect lamb each year for making everything right with God the Father for Jesus Christ (a forever perfect sacrificial lamb) who is His Son sent down to earth to make a way to see God the Father forevermore (John 3:16-21; John 17:1-3).

So, here’s my theory since God leaves it up to humans to lay creation’s timetable out. I say whatever doesn’t include God as the number 1 entity, it is not trustworthy. Although, 6 days of creating 1 day of rest is clearly evident in Creation story (Genesis 1-3). However, in Psalm 90:4 Moses states in a song to the Lord that

To you, a thousand years is like the passing of a day, or like a few hours in the night. (NCV)

Hmmm, that causes me to wonder? Was the 6 days of the Creation actual 24 hour days? Well, it could be. Yet what would you do with Psalm 90:4 in where it states

To you (the Lord), a day is like a thousand years, or like a few hours in the night. (NCV)?

Remember, both accounts of the time were written by the same man who had a deeper connection with God, Moses.

Humans are on the quest for certainty. It is evident in things all around us like in car repairs. You don’t want to be paying for a repair that isn’t the problem with your car, so we seek out car repair shops that have proven themselves to solve the problem in one visit. There are countless others that I could point you back to, but it says in Hebrews 11:6 that

Now without faith it is impossible to please God, for the one who draws near to Him must believe that He exists and rewards those who seek Him. (HCSB)

I don’t believe we will ever know for sure; however, there is the Holy Scripture which is the only collection of writings inspired by God through different writers spanning at least 6000 years.

God wanted to share eternity with us, His prize creation; but we sinned by taking the fruit of the tree of knowledge of good and evil, a command given by God that was for our benefit that we should not take the fruit of that cursed but alluring tree. You say, “Well, I never would have given in!” But really? “The knowledge of good and evil, how can there be anything thing wrong with that? It would help me avoid that which is a sin,” you say. Yet that is what exactly happened until 2000 years ago when a perfect baby had been sent by God the Father. That perfect baby that grew up into a man was, is, and forever will be Jesus Christ (God Son). By His physical death, it ripped the substantially weighted curtain in two, which means for us is that we have complete access to God, instead of waiting for a high priest to go into the holy of holies once a year to offer up a perfect lamb to be slaughtered. No, Jesus Christ is that slaughtered perfect lamb creating access to God the Father forevermore.

“In the beginning… Genesis 1”

“In The Beginning God Created…”