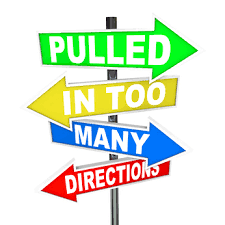 It seems like to me that one of the reasons God made me slower than your “average” person is to prevent me from being too fast-paced, Getting Pulled In Too Many Directions after my horrendous, nearly fatalistic car accident when I was less than a month graduated from high school (exactly 18 days after my 18th birthday). Truly, it has woken me up to the fast-paced generation we now live in. Yet, I also see how fast the world is going, and pretty much all of the time, I stress over being to slow in my body mechanics. I often pray to God to make me faster so that I can proclaim that nothing is out of Your hands and to spread the “Good News” as quickly as I can. And there is nothing inherently wrong with that prayer until you sit back and relax a bit.

On top of my duties as a husband and a dad (which I take seriously so they are an increasing pressure on me), and household responsibilities. I have work responsibilities; I have church elder responsibilities; I have those outside my immediate family responsibilities, etc. each one of those takes time. And I live in a constant 24/7 days a week “get it done fast” mentality. I try to live up to my own expectations, but more times than not, I miserably fail. Not only that, you feel the pressure that makes it seem like you have to act now or otherwise it will be too late. “UGG!!!” as one of my daughters would say. Also, I have other responsibilities than these I have listed for you here, such as keeping my eyes attuned to His Word, the Holy Scriptures, to bring postings each week on http://www.TrueLifeChristianity.com (by the way, it is my joy to bring it to you).

Yet, I know, through various sources, that there are many of you who encounter more and more responsibilities each day and significantly more than I do. And in today’s culture where everybody is focussed on themselves and the beginning of the Information Technology movement with things like the internet, quickly moving onto desktops, laptops, tablets, phones, watches, etc, we are so focused in on ourselves. I see it in our driving, and I see it in our public schools. I see it in any place where you can get media from, I see the self-entitlement movement making its way through social media. I see it in governments where one world power flexes their political muscles to try to squelch the other government into submission. It is terrible, a rouge to make itself look good but ugly to the core underneath.

How do we escape all of this? The answer is found in Jesus. Make some personal time every day for Jesus. To get to know Him a little bit better each day, I would suggest downloading an app for your smartphone and/or tablet by going to http://www.youversion.com. I would also suggest starting off with a more simpler version such as NCV (NEW CENTURY VERSION). When you think you can move to a more complex version, I would try the NIV (NEW INTERNATIONAL VERSION) or the HCSB (HOLMAN CHRISTIAN STANDARD BIBLE). Still, more complex but accurate version would be the ESV (English Standard Version) or the KJV/NKJV (KING JAMES VERSION or NEW KING JAMES VERSION). There are many more versions out there such as NLT (New Living Translation) or the RSV (Revised Standard Version). I also know, based on the statistics from http://www.TrueLifeChristianity.com, that many of don’t speak English or English aren’t there first more preferred language. There are versions and/or Bibles related to the language you speak, and just about all the languages can be found in the YouVersion app. So they are out there. If you really want to know God the Father, Jesus Christ His Son, and the Holy Spirit (Ghost) better, I ask you to pray this: “Father, please let me get a hold of Your Word, the Holy Bible. In the name of Jesus Christ, SO BE IT!”

I cannot forget to include a few Scripture verses for you to hang out on such as:

God gave you not only the honor of believing in Christ but also suffering for Him, both of which will bring glory to Christ. (Philippians1:29 NCV)

For you have been called to this, because Christ also suffered for you, LEAVING YOU AN EXAMPLE, so that you might walk in His steps. (1 Peter 2:21 ESV).

And the three verses about Jesus Christ and the resurrection:

“…that Christ must suffer, and that, by the first to rise from the dead, He would proclaim the light both to our people (Jews) and to the Gentiles (the rest of the world).” (Acts 26:23 ESV)

He opened their minds to the Scriptures, and said to them, “Thus it is written, that the Christ should suffer and on the third day rise from the dead and that the repentance of forgiveness of sins should be proclaimed in His name to all nations, beginning in Jerusalem.” (Luke 24:45-47 ESV).

For the preaching of the cross is but folly to them that perish, foolishness; but unto us which are saved, it is the power of God. (1 Corinthians 1:18 KJV)

And with Easter Sunday or Resurrection Sunday coming up in a little over a week, you and I should make a vow to the Lord Jesus Christ that we will dedicate a certain portion of each day to getting to know Jesus Christ, better meditating on His Word. When Busyness Creeps Into Your Personal Time With God (Getting Pulled In Too Many Directions)… you have a vow or promise to fulfill, a promise to the Lord God, Himself.

Please, whatever you do, take time for the Lord Jesus Christ because in Him you will find salvation.

Check out these links:

“The Cross Has The Final Word”-Newsboys ft. Peter Furler