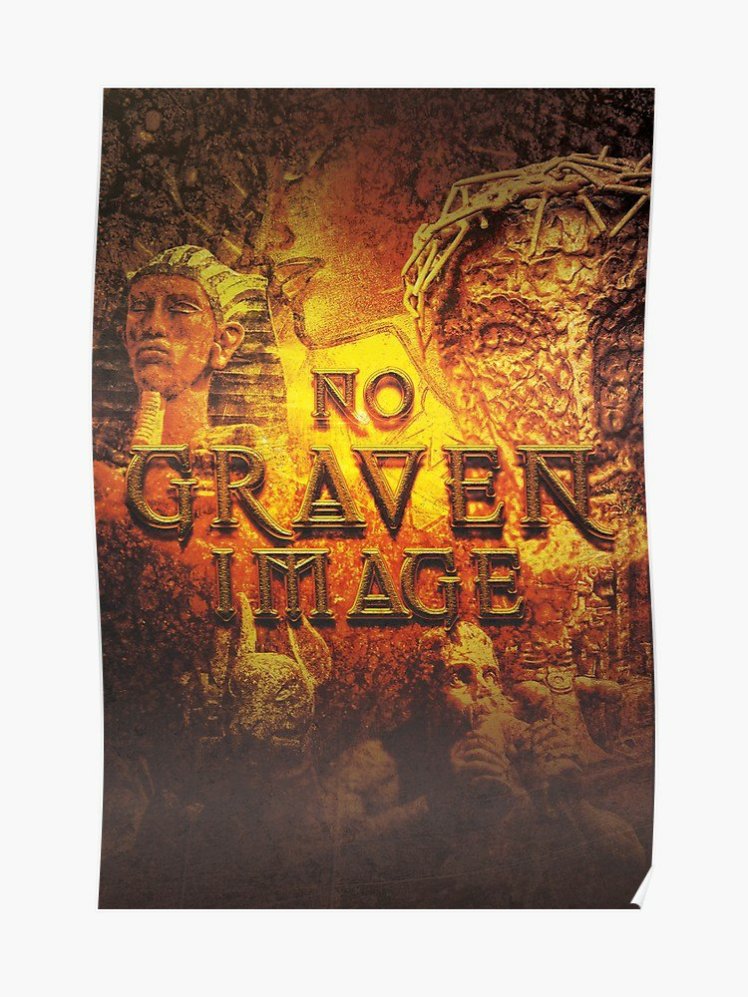 No Graven Images! But what does that phrase “No Graven Images!” mean? If you have been somewhere around a church (at least in America) then I want to bet that you have heard these words before. If you’re a Christian, you better know that this is the 2nd Commandment coming from Exodus 20:4-6 (different translations have another word substituted for the word of “graven”). However, I think the KJV usage of the word “graven” does capture the appropriate meaning. “If you follow anyone but God the Father, you are in a whole mess of trouble,” the Lord is pleading with all of humanity. Yet, the Lord Jesus Christ made Himself a substitutionary lamb without spot or wrinkle to be ready for the upcoming slaughter on the cross. Nevertheless, according to the Merriam-Webster dictionary, however, the word “graven” is given the definition of “the state of being dead.”

Early in my college career at Southeastern College of the Assemblies of God (now called Southeastern University), I was part of a group of friends, and we were talking about how Jesus Christ was not pale, or weak, as most of the pictures of Jesus our group of college friends had seen. Really, all of the pictures we had seen of Jesus, He was not strong enough to carry that old rugged cross of His execution, nevermind going through His whipping at the end of His trial (Mark 15:21-22). However, during this conversation, I found out that one of the people was an amateur artist. So, I asked him to draw me a life-size picture of what the real Jesus would have looked like on the cross. He was tickled to show his skill as he slowly and with intentionality went about constructing the picture of how he thought Jesus would look like.

When I received the drawing, I was flabbergasted! He obviously put a lot of hard work into it as this picture of Jesus is one that I had never seen before. It took him a few days before the drawing was complete as the drawing took up to four 4×4 pieces of poster board. Oh, as a matter of fact, I am sure he didn’t spare any details, as I am also sure that no expense was made to make this Jesus what our little group of college friends thought He must have looked like.

Jesus hanging on a cross. But this Jesus did not look like the wimpy Jesus as the world portrays Him to be. No, this was a muscular Jesus, battered and bruised with gushes of His holy blood on that crimson stained cross. Yet, even this muscular Jesus wasn’t Him. And there it stood, I placed it on my bedroom wall. Once again, I was flabbergasted each time I gave it any attention. It caused me to realize how much pain His physical body went through, and it was increasing my inner emotional knowledge each time I looked at it. Only a few days I had it up on my wall, and clear as day, I remember taking it down immediately. I got this uncomfortable feeling in my soul because the Holy Spirit on the part of Jesus softly whispered to me, “I am not up there anymore. Worship Me in spirit and in truth.” Without any hesitation, I immediately tore it down. I was so embarrassed by what I did; I broke one of the ten commandments. Yet I am glad that I have the Holy Spirit inside of me to warn and counsel me against what is wrong.

I have long since lost that 4×4 picture of the muscular Jesus, but the memory of it is surely implanted in my mind like concrete, just as my beliefs have matured in that I fall more in line with the Baptist view of things; however, let me say this: I’M A FOLLOWER OF JESUS CHRIST! PERIOD. END OF STORY. Yet, do you have anything that could be considered Graven Images hanging on your wall, in your pocket, in your car or worse? 🤔 Obviously, we naturally think of Graven Images as those cut of wood, stone, precious metals, and the like. We naturally don’t think that other things could possibly get in the way of our relationship with God. But they can and will if you give them room enough to do so. We, even, don’t consider other things we can put before God such as money, liquid assets, prestige, sex, and pride just to name a few.

Well, I urge you to confess whatever you are holding up over God, and making it your god. That is where God gets jealous since He knows those things only lead to death or the grave. There is no going back once you have physically died, except where God raised a few people from the dead using Jesus and His apostles. So, No Graven Images! because God cares for us that He begs of you not to have anything that can separate you from Him. Thus, making God holy but personable.

“What Is The Significance Of Graven Images In The Catholic Church”

4 thoughts on “No Graven Images!”